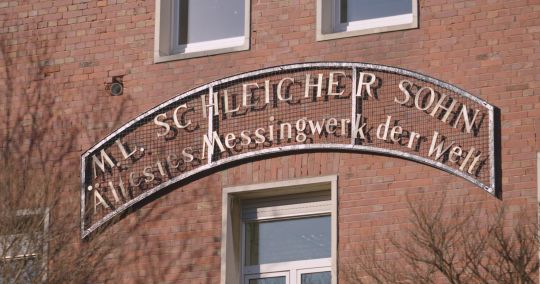 The story behind the oldest brass factory in the world.

As a traditional company, the KMD Group can look back on 444 years of history. Today it is the oldest brass factory in the world.

The foundation of the brass industry has been laid in 1571, when the council resolution from the city of Aachen changed the fate of Leonhard Schleicher. As a consequence, all protestants had to leave Aachen, which was at the time the European center of brass production.  Many sought refuge in the vicinity and so it happened that Leonhard Schleicher moved to Stolberg and built there the first copper yard in 1575. The foundation stone for the future brass industry was laid.

In the period from 1613 to 1750, more and more copper yards were built along the creek Vicht. This way Stolberg developed into a European brass monopoly. In total, 6000 tons of raw brass were produced in 62 smelting furnaces.

In 1658, the present buildings of the KMD Group Stolberg were built by Johann von Asten at the Kupfermeisterstraße. But first as a pure foundry for copper. In 1858, the families of Asten and Lynen joined their forces to build an additional rolling mill with steam operation.

In 1921/22, the first German Trio warm rolling mill was built for all brass alloys. Due to the world economic crisis around 1929, the situation of the brass companies in Stolberg deteriorated and the consideration to put the yards together found its conclusion in 1933. The new operating company "Stolberger Metallwerke GmbH" was founded.

The Stolberg Metallwerke (SMW) experienced a boom through the arms industry of the second world war.  In the course of the war in 1944 there was an evacuation and closure of the entire operation. After the war, a new start of production was not possible and so the SMW was written on the dismantling list. Only 3 years later, after the removal of the dismantling list, the operation was resumed with 350 employees.
By investing in a new copper refinery, SMW has been able to develop into a well-known supplier of heat exchanger and radiator belts. In 1962, about 24% of the rolling mill production went to Opel in Rüsselsheim. At the same time, the foundry was expanded in the Kupfermeisterstraße and a fast-running thin-strip rolling mill was built, as well as the first horizontalcontinuous casting line for bronze and nickel silver.

As a result of the expansion and conversion into a specialty factory in 1969, the company entered into a cooperation with Kabel- und Metallwerke Guthoffnungshütte AG in Hanover. This merger has invested in a four-high stand, continuous annealing and slitting line. At the same time, however, the refining, block casting and hot rolling were abandoned and later the wire gearing was closed. During this time, SMW had become an important supplier in the cable and coaxial cable manufacturing industry. Special emphasis was placed on high-purity types of copper, such as E-Cu and SE-Cu, which were important for energy and telephony cables.

SMW started to specialized more and more in the needs of the connector market for electronics, electrical engineering and automotive engineering.  In 1986, Kabelmetal holds 100% of SMW shares. The company becomes famous for tinning. In 2003, SMW is fully integrated into the KMW Group, its name changes into KME Stolberger Metallwerk.